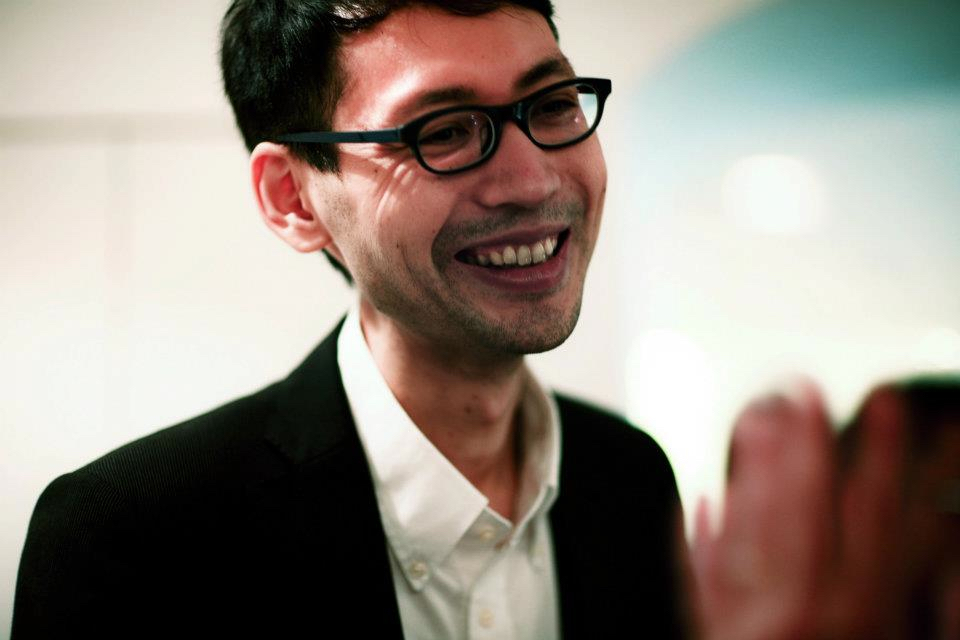 Tsuyoshi Toyota, founder and owner of Doyosha, an independent publishing house in Japan

Doyosha is a small independent publishing house in Japan. Its motto is “books with an attitude”. Some of the books Doyosha has published include Cowboy Kate & Other Stories, the pioneering photographic essay by Sam Haskins and a Japanese translation of A Cloud in Trousers, a key work in the Russian Futurist movement by Vladimir Mayakovsky. 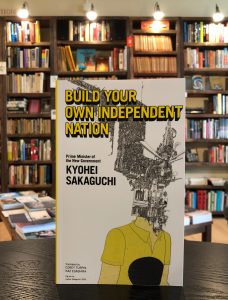 Bleak House Books recently started to carry some of Doyosha’s unique titles, including Build Your Own Independent Nation by Kyohei Sakaguchi, a polemic of sorts against the problems that plague Japan and other industrialized nations today.

Unlike car or computer makers, most publishing houses are unknown to folks outside of the specialized circles in which they operate. For a publisher like Doyosha, however, the task of reaching an audience is even harder. For one Doyosha is comparatively small (its startup capital was 3 million yen or the rough equivalent of HKD $213,000.00).  And it specializes in titles that are in Japanese and mostly outside the mainstream as far as literary trends or tastes go.

We wanted to change that and decided one way to do so would be to give the founder and owner of Doyosha, Tsuyoshi Toyota, a platform here at Bleak House Books. Hence this interview, which we conducted with Tsuyoshi over email.

Tsuyoshi was nice enough to agree to do this interview even though we would be asking him questions in English rather than in Japanese, his native tongue. He responded to our questions in English and asked us to edit his answers for readability and clarity, which we did. We then sent Tsuyoshi the edited responses and sought his approval for our edits, which he gave us. What follows is the result of that process.

I was born in 1977 in the valley of Koga, a hidden village of Ninja. It was a place without any bookshops of any kind. So my family and I lived without books for a long time. The only reading material we had regular access to was the national paper, delivered every morning by post.

I remember my grandparents had put up photos of Japan’s Imperial Family around the house, and I used to think that the people in the photos were relatives of ours. Little did I know!

When I turned eighteen I went to Tokyo to start my university studies at Keio University. I majored in economics. I lived very close to campus — about five minutes by foot. My living quarters were small and sparsely furnished. It consisted of a single room, about nine or ten square meters with no kitchen, bathroom or air conditioning. But none of that mattered to me since I spent most of my waking hours in the university library, staying until closing time, which back then was 10 pm.

After I graduated Keio University, I got a job at the university press. The best part of the job was getting the same special access to the university library that professors had. Floors that were closed or books that were off limits to me as a university student were now up for grabs. It was a wonderful feeling!

Although I’ve been an independent publisher for the last nine years, my dream is to run a private library of my own one day.

I assume you read a lot for school. Did you do any reading outside of school as well? If so what kinds of books, comics, or other material did you read? Did you have a favorite writer or illustrator growing up? What about now?

When I was in school I worked in two bookstores part time. I’ve also worked in publishing for almost twenty years. So I’ve done a lot of reading, yes. Up until now, however, I feel like I don’t have a favorite book. You can say that I’m still on the hunt for that “great” book. To me that search is what makes life interesting and meaningful.

What led you to start your own publishing house?

There was never any question in my mind that I would go into the book business. The only question was how to go about doing it and where I would get the money. I had a few options like opening a library, a bookshop selling new or second hand books, or starting my own publishing house. I knew I didn’t have enough money for the first two options. But I had just enough — around 3 million yen — to publish 2 or 3 books, which is how Doyosha came into being.

Doyosha means Saturday in Japanese. Is there a story behind that name and if so what is it?

Coming up with a name for a publishing house in Japan is not a terribly creative activity, I’m afraid. A lot of it is based on tradition. Some names come from old time China, others from the West. Doyosha is a traditional Japanese name. In Japan some publishing houses are named after the days of the week.

According to its website, the tagline for Doyosha is “books with an attitude”. Can you share with us the meaning behind that statement and more generally the philosophy behind the kinds of books Doyosha publishes? In other words, what do you look for in a book before you decide that this is one you’d like to make a part of Doyosha’s library?

The tagline “books with an attitude” is based on the name of a rap group called N.W.A. or Niggaz Wit Attitudes. The idea for the tagline came from an author whose book we published at Doyosha and we decided to use it even though I don’t really listen to rap music myself.

That doesn’t mean I’m without “attitude”. I have plenty of it if you should know. One thing that gets me worked up the most is seeing how our over-programmed, over-worked lives, coupled with heavy doses of TV and smart phones have destroyed our reading culture. But my opinions don’t factor into deciding what books we publish at Doyosha. I want our books to have “attitudes” or voices of their own.

What’s a typical work day like for you at Doyosha?

My day usually starts at 9 am and ends at twilight. I spend most of the day reading proofs. At around 5 pm, the courier service comes to pick up books we need delivered to our customers. Then I spend about 20 minutes cleaning up my work space, and that’s when I call it a day. Sometimes during work I walk to a nearby bookshop called Daikanyama Tsutaya Books which is about one minute away, or to Shibuya public library, about 10 minutes. 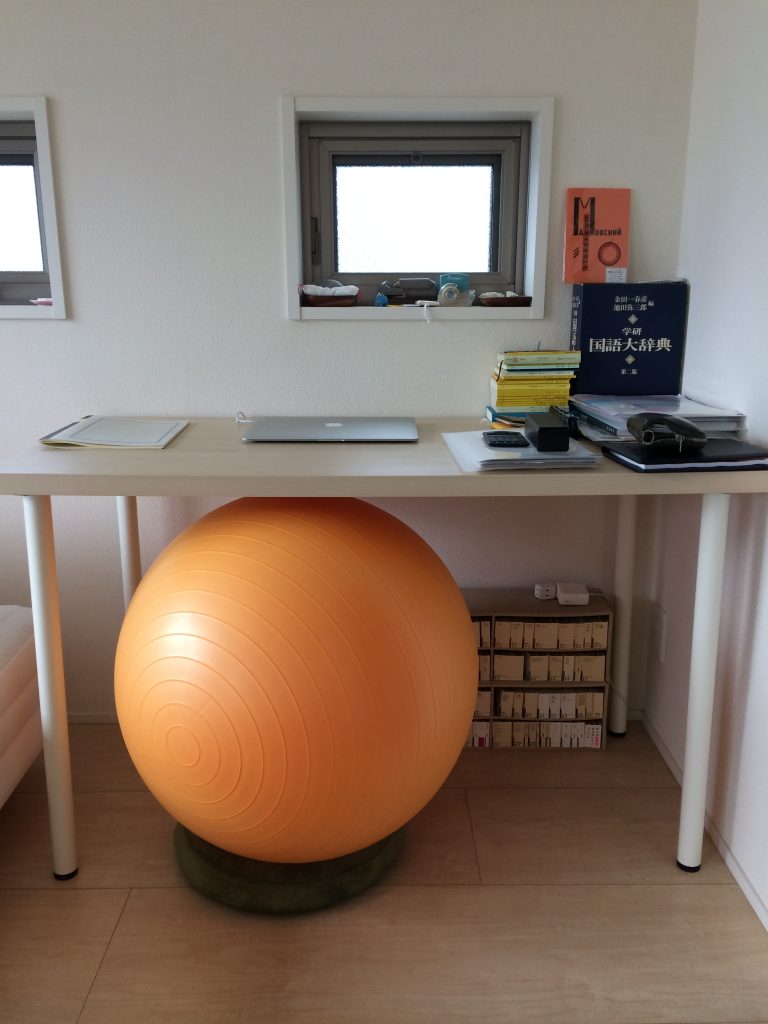 Where Tsuyoshi spends most of his workdays

Last question: here in Hong Kong there is often a lot of hand wringing or concern about the lack of a reading culture, especially for pleasure or self-fulfillment; not that people aren’t reading in Hong Kong, but they’re reading stuff in bits and pieces and on a wide variety of devices and media platforms, the least of which are books. Is this a concern or trend that also exists in Japan? If not then what is your take on why Japan is different in that regard? If this is a concern or trend that exists in Japan what is your prognosis for Japan as a society that reads?

When I visited Hong Kong in 2004, I had a hard time finding good bookstores or vinyl shops (the one exception on the vinyl front being HMV). At times I saw people in Hong Kong who appeared to have carefree, fun lives, but for most people there, I thought they were very busy with work and family. Busy talking about business. Busy spending time with family. And busy getting to and from work. To be honest, I liked Hong Kong as a city but found its arts and reading culture somewhat lacking.

If you ask me what we need to do to create a environment that will be less hostile to readers I would say that we need to be more careful with how we manage our time, space and money. That means people, in Japan and elsewhere, should opt for quiet lives surrounded by books and family rather than leading the life of a global consumer, always on the road or watching TV.

One thought on “An Interview with Tsuyoshi Toyota, Founder and Owner of Doyosha (土曜社), the Japanese Publisher of “Books With An Attitude””